9 February 2015 by admin in Previous Events 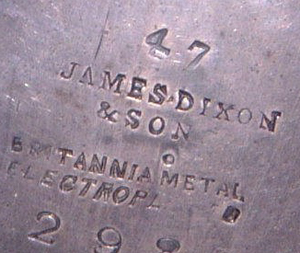 Pauline Bell will give a talk on ‘James Dixon and Sons, Victorian, Sheffield silversmiths’.

James Dixon and Sons began in 1806 and by the end of the century had grown from a handful of workmen to a firm employing hundreds of men and women. They produced and exported their goods all over the world, including elegant tableware, candlesticks and centrepieces for the sideboard. Later they were to produce items such as hairbrushes, cigarette cases and various kinds of lamps. Their most elegant pieces came as a result of their association with Christopher Dresser, the man now frequently described as the father of home furnishing. With Dresser’s New York and London exhibitions, an EPNS teapot designed and made at Dixon’s can now reach prices touching £100,000 at auction. Well known in America for both knives and gun accessories, Dixon’s powder flask department manufactured all kinds of products essential to shooting sports, needed at a time when the west was the Wild West and hunting and shooting were about survival. Towards the middle of the twentieth century they became one of the foremost makers of unique sporting trophies such as the Blue Ribband Trophy for the fastest Atlantic crossing by sea, the American Masters’ Golf Trophy and numerous Grand National Trophies from the 1950s to the 1970s. Again they had a very talented designer in Charles Holliday. From the 1840s generations of Coopers, the Author’s family, worked for Dixon’s as silversmiths, stampers, hollowware buffers, finishers and burnishers. They are representative of similar dynasties where sons and daughters followed their fathers and mothers into the firm.